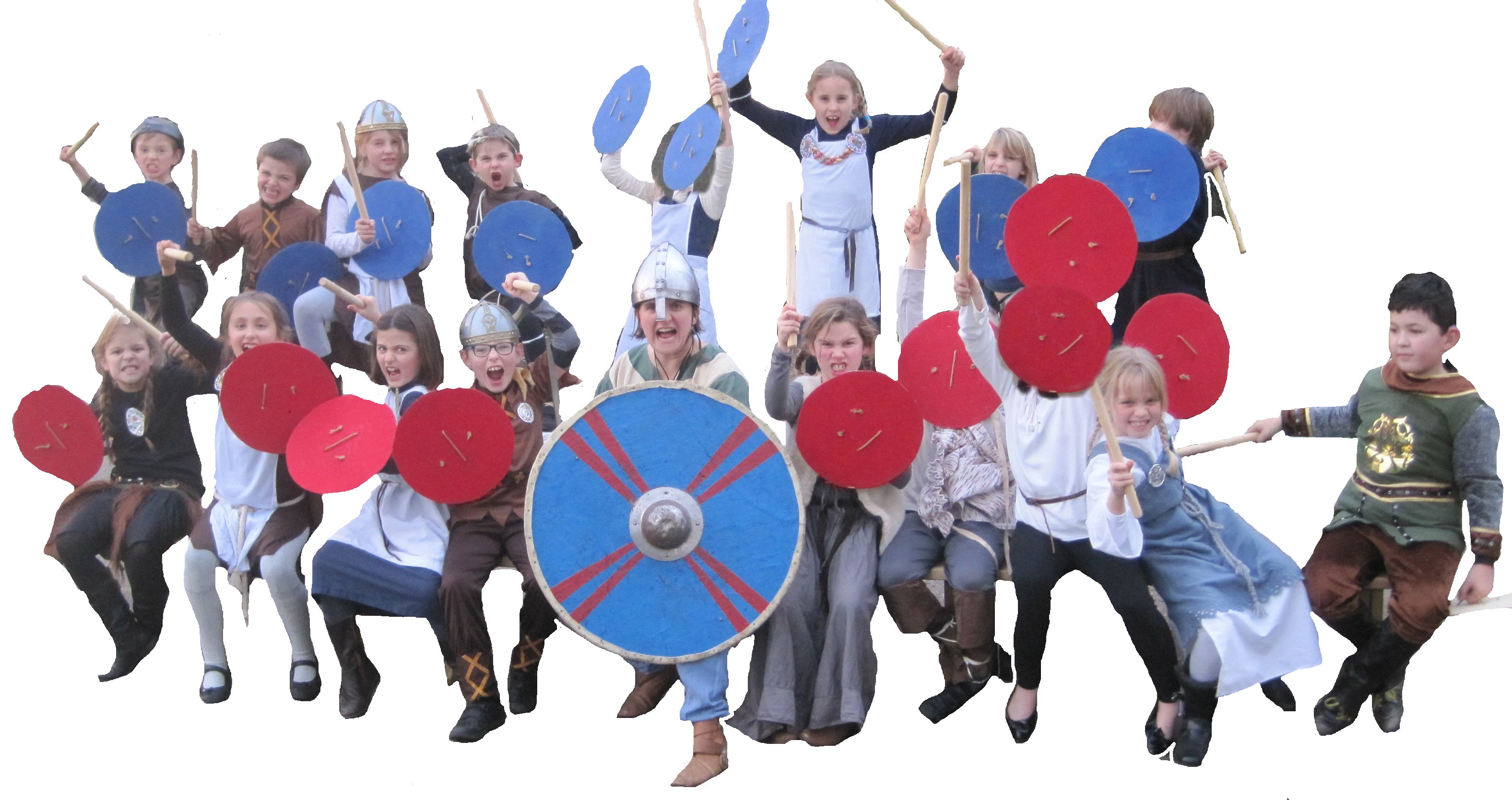 From the first Viking raid in 793, the east coast of England was threatened by Vikings whenever the weather held for long enough for a ship to make the crossing. Each summer, raiding parties would land, raid inland, and then beat a hasty retreat back to sea before the local defences could be organised against them.

In 854, the Vikings first stayed over the winter, building a fortified camp on the isle of Sheppey in Kent. By 866, the lure of the wealth of England drew a Great Army across the sea, led by the sons of Ragnar - Ivarr the Boneless, Halfdan, and Ubbi. Across Mercia and Northumbria, the army moved freely, and in 870 descended on East Anglia, killing King Edmund and sacking the abbey at Peterborough.

The Great Army terrorised the county until 878, when under the leadership of Guthrum, it was defeated at Eddington by King Alfred of Wessex. Making peace with Alfred, Guthrum retreated into East Anglia with an agreement that the land should be divided - the Treaty of Wedmore described the boundary of the Danelaw as being:

'up the Thames as far as the river Lea, then up the Lea to its source, and then straight to Bedford, and then up the Ouse to Watling Street'

By the time of Alfred's death in 901, the Danelaw was firmly established, and all of the kingdoms of East Anglia and Northumbria were under Danish control. Mercia appears to have been a ravaged land, with Ealdormen being set up by Wessex only to be torn down by the Danes.

England as we know it

Somehow, Mercia recovered, and under the leadership of Lady Ethelflaed, the kingdom was fortified and much of the lost territory recovered. Meanwhile, her brother King Edward of Wessex was pushing from the south, and by 921 had managed to regain control of much of Cambridgeshire and Huntingdonshire, with the Danish armies of Northampton and Cambridge submitting to his rule. By Edward's death in 925, he had regained control over all of England, and the Danelaw was an integral part of the Kingdom, albeit with its own laws and customs.

From 925 to 980, the kingdom was relatively quiet under the rule of Athelred, Edmund, Edred, Edwy, Edgar and Edward. Sporadic fighting and border raiding took place, but usually with no lasting impact on the kingdoms, and with swift reactions from the King, each threat was quickly nullified.

In 980, Ethelred became King. Known to us as "The Unready", the original form was "unraed", meaning "no counsel". Ethelred was placed under difficult circumstances, and either through his own weakness, or through the weakness of the Earls and other advisors he had around him, his reign was blighted by renewed raiding, culminating in the period when the raiders were paid to go away - the country paid the Danegeld. Perhaps predictably, the Danes returned at regular intervals, and were paid increasing amounts in "protection" money, rising from 10,000 pounds of silver in 991 after the Battle of Maldon, to 82,500 pounds in 1018 as the first act of King Cnut (Canute) after gaining control of all of England.

Canute ruled until 1035, and was succeeded in quick succession by his sons Harold and then Harthacanute, who died without heirs in 1042. The Saxon line appears to have been brought back into court, and Edward ("The Confessor") was nominated as King, reigning until 1066.

The childless death of Edward led directly to the nomination of Harold Godwinsson as King, and to the competition for the throne of what was perhaps the wealthiest kingdom in Europe at the time between Harold, King Harald Hardrada of Norway, and Duke William of Normandy. By the 14th October 1066, Hardrada lay dead after the Battle of Stamford Bridge, and Harold faced William across the slopes of Senlac near Hastings. In one day, the future of the Saxon kings trickled like sand through the dead fingers of Harold, and William saw his dreams fulfilled as his army rode victorious across the field. England was his, but there would still be resistance for almost ten years more.